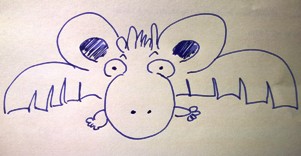 bats early in the morning

For today's post I did not really have a picture, thus I had to get one. So there you go...I got up super early, for no particular reason. If I wake up I get up, usually, because you never know how many days more you are given to wake up. And I usually wake up with an idea or a thought. This morning, I actually woke up with a perfume in mind, including name and all. That's a nice start into your day, although the more you move into your day the more the ideas usually faint.

Anyhow; as it was so early I sat on the balcony, observing how the light changed from moonlight to dawn's first signature on the horizon. And: I 've seen bats. Finally! All summer I was watching out for them and -although seen at night in previous years- I haven't seen one. This morning they were there, plenty of them, catching their good night goodie.  A perfect morning.

And while sitting there and watching the bats move around, I remembered a comment on Feeling, Looking, Smelling Great (a facebook group) where someone classified fragrances as "dense" or not dense. When I read that, I learned that I keep on learning. It never appeared to me that one could classify a fragrance as dense. But there you go: It is actually a good term, me thinks... not dense is quite the industry standard these days. In noble words one might call them translucent; yes, Iso E , I am looking at you, and Cashmeran, you're part of the club, too.

And then I thought that naturals are actually dense, normally. Except for a few like lavender or bergamot, but take a natural vetiver=super dense. Or rose absolute: Dense. Jasmine: Dense. Even simple stuff like patchouli: Dense. Patchoulol, a single molecule, a natural ingredient of patchouli essential oil: Not dense.

And then, my mind stopped working and I needed another coffee as it was just too early.

6 thoughts on “bats early in the morning”