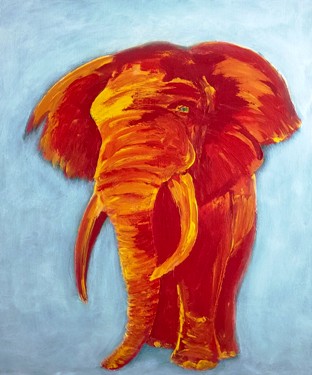 Today's post title could probably also be "the big picture", or "if you want to eat an elephant".

You know how the saying goes: "If you want to eat an elephant, do it in small bites. " The elephant you see on this post is the result of yesterday's painting exercise, acrylic on canvas, pretty large, like 80x70 cm. I like it, for a couple of reasons: One is the colors.  The elephant's color was immediately clear to me; the background however took me forever and I changed it three times, and every time it got a bit better. The goal there was to complement the orange red (hence the blue-green tone) but to also enhance the the plasticity and three dimensionality of the elephant.

Anyhow, the big picture. The other day, I was listening to a radio interview with a philosopher who explained to us what is wrong with modern media and the flow of the newest news of the  moment, like you get it on twitter, facebook, the news portals and the longer the more in the traditional media like newspapers. It is  a constant flow of news items, isolated from a context and without explanation of any reasons for the news. It is like zapping around with the remote control of the TV, or switching youtube channels: You get entertained by a few impressions, but you do not get the film and its story and context. It is ok for movies, maybe, but it is dangerous in other contexts.

Does it matter? Yes, you bet. Because we are drowning in a sea of irrelevance and miss the big picture. Like what's happening in the middle east. Looking at the lines of the many conflicts there needs a lot of time, effort and thinking. But at some point, you might realize that there is a larger engine running that's shifting the tectonic plates there.

Or look at perfumes and news there. By just looking at the news about the launches and a few reviews here and there, you might miss what is really happening. It's a tectonic shift that started and announced itself  a good 50 years ago: Perfume for the masses, perfume as commodity, you name it, started there.  Niche in Italy started about 30-35 years ago, as a result, and the big engine that's driving the plate's shifting is still running.

OK, I admit: This perfume statement above is not really relevant; it is the producer in me who looks at this bigger picture. The creator does not really care.

And with that post, irony ahead, I added a little news item that might blur the bigger picture. Have a great day!