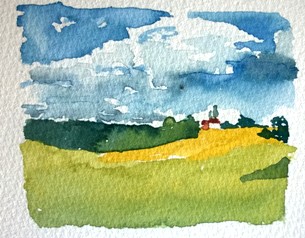 Today's picture is a miniature watercolor illustration. I real life it is about 8x5 cm. In the watercolor class, we are supposed to try doing miniatures of a motive before we go full scale. The deal: Get to know your motive, try color schemes, play with the light and don't waste paper. Not because of ecological considerations but because good watercolor paper is expensive. The same, even more actually, is true for oil pastel  paper that is, in good Sennelier quality, really! expensive. To cut cost down there, I bought half a ton of large (100x60cm) sheets that I can cut into smaller pieces. That was last week's highlight, when the paper arrived, from France.

Often, funny enough, these miniatures end up nicer than the larger pictures.

When I create perfumes, I sort of do miniatures, too. Just a few ingredients to peel the "motive". And, yes, there too:  The miniatures are often nicer, at least in my nose, than full blown formulas. Don't ask me why. Maybe it is the simplicity; less distraction by side stories from a main theme. Maybe it is just me who likes simple things (sometimes). But then, trying to be honest with myself, I realize that these simple trials are "nice" but not much more. And there is enough "nice but not much more" out there.

You know, when it comes to creation "nice" is not always a compliment. When the teacher said "nice" commenting about today's picture, he immediately also said: "really, I mean it. It is nice." You see: Nice can be the opposite of "interesting", "double bottom", "twist",...

In the class we then started discussing, about nice, and about: Orchestration. We agreed that I should actually cut the little illustration out. Put it behind a passe-partout, and frame it, at least A4 (30x20 cm). Hang it on the wall (yeah and sell it for $$$, that's what I thought).

In the end, that's about like putting together a nice little "eau" and put it into a golden flacon, with some Swarovski stones or other decorative elements, and orchestrate it in a campaign with snakes, or gold flakes inside or flowers and stuff, and then be loud about it. "the best fragrance in the world, perfume as an art, luxury perfume", anything goes basically. One important factor, though: Make it expensive.

It is all about orchestration.

This is one of the reasons, why -in perfumery- I just can't stand the term "art" anymore. It's been used so extensively, that -like niche as term- it has become obsolete. Especially when used in  a context where the objects of art are mass created by labs, like oil paintings made in China that you can get for a few $, like this one here.

12 thoughts on “miniatures and orchestration”