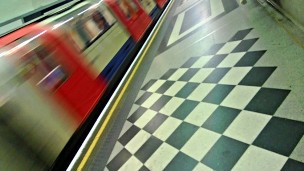 so yes, I was in London the day before yesterday, for about 20 hours and today's picture is kind of a proof. I am not totally sure, but I think it was in the Holborn station where I took it. Usually, when traveling somewhere for business reasons, I try to stay another day: It did not work out this time, as I have a touch too much going on and needed to get back. Next week sees me traveling east and I need to get some stuff done before.

Thus, there was no time to meet and greet really. A pity. But I managed to hop into Les Senteurs as I was around the corner anyhow: What a cool shop at Seymor's place! So, yes, I mentioned it: A business trip, which translates into... meeting people and sniffing perfume and talking about why I do what I do the way I do it and asking questions about them why they want to do what they do the way they plan to do it. And while smelling and talking you try to find out whether you fit, and whether it makes sense.

As it is a great new thing, and as I promised not to talk about where and who: No details here about whom I have met for what particular reasons. But one thing I can tell you: I feel it was a great trip and I was not wrong with my gut feeling that the people that I wanted to meet are nice and interesting and interested in what I come up with. So, yes: that was a good trip!

Talking "gut feeling". Strange as it is: but even when talking business, with numbers and margins and return on investment: The gut feeling is so important!

It is funny, but sometimes, even right after the first mail, I realize that a potential retail partner is a 100% "no-go." It starts with not having done any homework before contacting me. And it usually ends with demanding free goodies a gogo. I have learned the last few years to trust my instinct and not to hesitate to say "no" asap. Like: After the first mail. Like no way! You know, it is a strange world out there..... a lot of retailer (perfumeries, going to be perfumeries, concept stores, fashion  boutiques) have realized that they need and want something special. But often, they are not really reflecting what it means to be special. And some think that, just because I am small, they can ask for free pieces of the cake that end up being half the cake actually.

So, yes, it is a strange world out there. But funny, too. And I am becoming the longer the more picky about with whom I work together and who actually gets my products. And I guess this makes sense, the longer the more. The examiner mentioned about 100 launches for April only, based on Fragrantica data. Wow! And yes, Noontide Petals was one of them, and presented on Examiner.com . Thus, there is actually good reasons that not only perfumers but also perfumeries become selective. Very selective indeed.