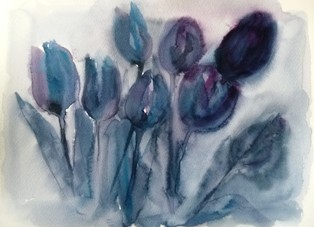 tulips on the go

The coming days will be getting nicer and warmer from day to day and probably busier from day to day, too. But that's going to be ok. I just need to ramp  up the production of some scents, air du désert marocain is one of them. And in case you are interested in a nice concise review: There we go. Here's the link to Victoria's post on her EAUMG blog. Enjoy!

And as I will be sort of busy, there will not be too much time for painting and playing. Which, again is going to be ok. The more time I have for painting the less things turn out right anyhow. Most of the time that is. Yesterday, there was the watercolor class again, and we got into tulips. I ended up with 8 different takes, different techniques, and trying to bring out different aspects. Or better said: I was trying and the paper had its own plans.

I picked one of them for today's post: slightly faded colors, totally wet, with one tulip being almost black. The "tulipe noire". Not that it was planned. But once it was there, it was ok.

Ten years ago, I was working on the formula of air du désert marocain, and presented the finished perfume some when in September the same year. What follow next was not planned at all. Back then it was a game really, with some serious background, but I took things very lightly. Air du désert marocain was not born out of necessity, but rather happened because the time was right. But once it was there, it was ok.