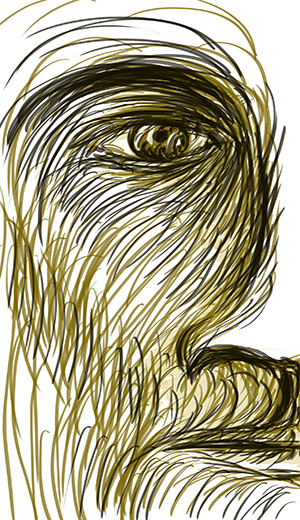 So there we go: Friday! Creative Friday, partly at least. This week has seen me carrying around a more or less dysfunctional nose. Interestingly enough, it was dead as a dodo before the cold really hit. Somehow the receptor were down. Whatever! There are just enough recpetors left today to play bit, and do dilutions of experimental trials.

But first, I will have to hit the factory, though, where I face this:

I have to see that I can keep my promise to a client, and will need to re-ship, but not to the US where -at least for this shipment- Fedex USA was pretty much out of control. And pretty silent. Yesterday, I had to spend my later afternoon waiting for the above shipment. I looked probably like this  illustration that I did using my finger on the ipad with Adobe's Ideas App, yesterday after 4 pm.

It was a great test for my packaging, though. And unpacking it was a pleasure. All perfect!

So, you see: nothing new under the sun. Logistics. From here to there. And administration.

Later, after the factory, we hope for flow and energy. The energy, I will need for the gym, fighting those negative thoughts, and the flow, I will need to paint.

Have a great weekend, everybody!

Today's picture: The flow hitting me this morning at 7am, cintiq, photoshop.