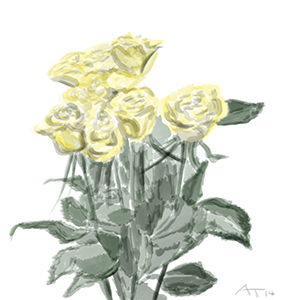 sometimes, down time, waiting time, being-in-the-loop time is great: I try to fill it with stuff that I want to do but do not find the time to do it because I think I have more important things to do. So I fill with with activities like sketching, or playing with software, or following the stock markets or blogs with raised eyebrows. Those of you following this blog since 2005 know that I follow the stock markets, mostly when they are turning bizarre or odd or out of touch, in my opinion.

raising eyebrows, body language meaning: interested and wants to know and see more, but also being a bit surprised. And it is a bit an invitation, too. Answers: Please.

Or I just waste this downtime, because it came for free.

Although, to be honest, I am convinced that what might look like wasting time will end up being part of a bigger scheme, one fine day.

Yesterday's waiting time playtime while hoping for computer no.1's stuff getting finished: sketching on computer no. 2 a bunch of roses, trying to capture what makes the yellow buds and the leaves and stems special. It is also an eye training session. And it is interesting. We recognize a rose immediately, but what actually makes a rose a rose? Looking at the raised eyebrows further up: I feel that we humans are really good in recognition of patterns and forms. Deers, for instance, are not.

Anyhow. The other sketch I did yesterday is less a downtime sketch, but I figured that an illustration for the upcoming newsletter might be nice. So there we go...one word here: I did it on the ipad. The ipad is about 2.5 years old and since the update to the new iOS it is just too slow. Because it got too slow, for certain apps at least, and because it started to crash sometimes, and more and more regularly, I should get another one, really. But I am not willing to invest into a tool that feels like it is rendered dysfunctional "on purpose" or better "by plan" after 2 years use. Contrary to my Mac computer, all apple tools that I got lately did not last that long. And many of my friends got quite unhappy, too. So, there we go, raising eyebrows.

Today, that's the plan at least, early in the morning, will see me working a bit on orders in the factory, followed by newsletter putting together activitie. And it will see me mixing and smelling around my woody creamy vanilla. This is playtime with scents that I do not like to mention too often, as I do not want to raise wrong expectations and have you all raise your eyebrows, too high.

Have a great end of the week!