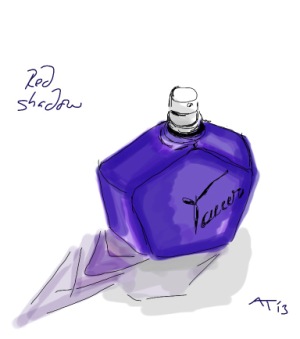 Yesterday, in the factory, while pouring Incense extreme into bottles and crimping them and putting labels on, it happened that for about 5 minutes the sun came through. In light of temperatures that are still close to zero, and a grey sky that torments northern Europe since felt eternities, this moment was quite special. Like "wow". Or picking a sentence from Elena's review of Noontide petals (must read) on her blog Perfumeshrine yesterday "alles ist Licht". By the way: There, on perfumeshrine, you can win samples of Noontide petals, too.

Alles ist Licht translates into everthing is light, which in a sense is very true from many perspectives.

Thus, for a short moment everything was light in my little two room factory and the flacons, filled with Incense extreme, were illuminated and transluminated. The Incense extreme is a rather uncolored fragrance, as I do not add colors to any of my scents they get the color by the raw material, mostly flower absolutes, and some vanillin reacting with other ingredients. And hence the flacons were shining like blue bulbs. And, interestingly enough, the shadow, in my eyes at least, featured different intensities of red.

A fact that I tried to capture in the illustration that I picked as picture for today's post. I did it during these sunflooded moments, kind of a creative break. I was never that good in physics, but the more physics sounded like voodoo (quantum phenomena et al ) , the more I loved it. So.... I wonder. Why is the shadow reddish. Is it because there is a red element inside the cobalt blue colored glas. Or is it some other sort of effect that can be explained? Maybe one of my smart readers has an idea....

While I am waiting for an answer: I will fill the first Noontide petals flacons today. Again hoping for a moment with the sun, shining through the blue flacons.